Dear friends and family,
Thank you so much to those of you who are praying for us, supporting us in various ways, and keeping in touch with us. It is a great encouragement to us. We are doing great!
There are some things we are still having to adjust to, though! Like the coconuts dropping from the trees onto the tin roof in the middle of the night. It sounds like the house is being bombed. In fact – it can be very dangerous – they tell you here not to stand under the coconut trees because they could fall on your head. Sounds funny, but if one were to land on your head from way up in a tree, it could kill you!! Hard to believe!? It’s easier once you hear one hit the ground. Ouch!
Right now is rainy season, so there is more wind, and more coconuts dropping. It has been getting hard to sleep. We decided to ask Chris’ language helper if he would cut them all down at once so we can sleep and not get beaned (we have to pass under the tree to go up the steps to the Walkers apartment.) He (his name is Mark) said that he would, if he could use some rope and a bush knife. He got out of his “town clothes” and borrowed some old shorts, and I got some laundry line and our bush knife. ( machete)
I don’t know exactly how I was thinking he would climb the coconut tree – which is about 30 feet tall. Well, what he did was not what I expected. He tied his own feet together with the laundry line and proceeded to climb up the tree in big hops … in a matter of seconds!! I was so surprised I didn’t even notice how he got the machete up! He got up to the top and took the rope off his ankles, and proceeded to chop down all the coconuts. My palms were sweaty just watching him climb around in the top of that tree.
Now, the coconuts we had heard dropping on the tin roofs were ones that had dried up and dropped. These that Mark was cutting down came down by the half dozen, and were full of coconut milk besides! The crashes sent the children into the house screaming and all the neighbors popped their heads out (but not too far!) to watch. One particularly large bunch of coconuts hit the roof on the way down and actually cracked one of the roof beams! We’re gonna have to ask the landlord about that one… 🙁 Well, all this to say, life is interesting here – and don’t stand under coconut trees!!!
Love,
B&J

Shiloh, Marietta, and Solomon (who all helped carry a bunch of the felled coconuts under our apt. for Daddy to drink 🙂 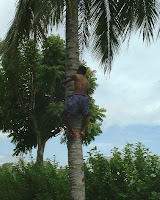 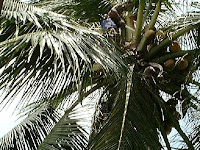