As Posilonge held his little son Tom in his arms, I spoon-fed him trying to give him strength as this 6 year old fought for life.  Posilonge was obviously exhausted, as his 11 month old had died during the night from the same sickness that had now made its claims on his older 6 year old boy.  A day and half away from the nearest medical facilities, all that the Mibu believers could do was to pray.  And pray they did!!  “God, give us this boy”, they prayed in their simple way.  After having spent the whole day with them, I walked back home with very mixed emotions.  Saddened at their lot in life, so far away from simple medicine, so that even the most elementary of illnesses often claim their lives.  Yet, I am encouraged to see the dependency on their new found Father.

At 6:30 the next morning, Posilonge’s brother Sivi showed up at my house.  Little Tom had died at 1:00 in the morning.  I went down and immediately went into the house where little Tom was.  I had no sooner finished mourning for him, when Sonde asked me, “Why did God allow this?”  He continued, “We’ve often seen two people die around the same time, but we’ve never seen one man lose two children inside of a day’s time like this”.

We spent the next hour talking about God’s purposes in sorrows.  We talked about how God’s plan for us is to become like Jesus.  As Jesus suffered first, and then was glorified, so God uses suffering in our lives to cause us to depend on Him even more.  This is all to strengthen us.  I told them how in America we purify metal by melting out its impurities.  Seeing that they caught the correlation between that illustration, and God using suffering in our lives to strengthen us so that we can glorify Him further, I asked if they had anything similar in their culture.  They gave me this illustration from their world.

“When we attach arrow tips to the shaft, we use tree sap to hold the tip in place.  But, in order to make the sap work, we have to cook it in the fire first, until it melts, only then we can apply it to the arrow.  When the sap cools, it hardens, securing the tip in the shaft.”  I then asked them to tell me how that applies to this situation.  They concluded that all their pain and suffering was for a purpose, so that they could be further used of God!!

As if that wasn’t enough, God still had something else in mind to teach us in this object lesson.  They asked “Were we wrong to pray to God asking Him to spare this boy’s life”?  From there we discussed how God wants to hear our heart’s desire, but just as we prayed “Not according to our desires, but according to Yours.”  I told them, “We asked God for something good, but He gave us something very good.  This time of sorrow is like training for us to produce in us the ability to serve Him to a greater degree”.

So, that’s how it happened that on July 21, 2006, believers from such an obscure place on planet earth as this joined their voices and said “Thank You” to God for bringing about the intense sadness of the loss of two young boys.

The next day at church (as if God hadn’t already taught us enough), guess who was the one to stand up and publicly pray for a sick man in Tariknan?  It was Posilonge, the man who had lost his two sons.

We are privileged beyond words to be here in Mibu PNG.

I wish you could meet Royfo, one of the Mibu believers who is laboring alongside us in the outreach to Tariknan.  Royfo’s name has a bit of a story to it…  He comes from a village where there are 3 other people named Roy.  In order to avoid confusion, each Roy has been given a number.  So, there is “Roy-one”, “Roy-two”, “Roy-three”, and of course our friend “Roy-fo”. 🙂

Royfo was among the first here in Mibu to trust in Christ, and was also a graduate of the first literacy class.  Royfo was married just last year to a young girl from Mibu named Oolaipe.  (pronounced oo-lie-pay). We recently heard that they are expecting their first baby soon!  Since Mibu people believe that pregnancy starts when the mother first feels the baby kick, it’s harder to guess at a due date!

Royfo was one of 8 or so men who volunteered to bring the gospel on to the next village.  We had an awesome time this last week together in Tariknan teaching up through the story of Sodom and Gomorrah.  Royfo could not contain his excitement when, at the very end of the Sodom/Gomorrah lesson, one man stood up and said, “We are like the people of Sodom, and like the angels that warned Lot of the coming judgment, you guys have come here to warn us of God’s wrath against our sins.”

During the evenings at Tariknan, we often just sit around and talk with the guys.  Royfo is very curious about the end times and the judgments to come.  You should have seen his and Gero’s responses as they were reminded that prior to the judgment, God in his gracious love for us believers will take us up into heaven just as he did with Enoch.  Gero passionately exclaimed, “Oh, the mercy of God, Oh, the mercy of God for us who believe in Him!”

In one of our evening chats, Royfo questioned me as to how many believers there are worldwide. He was interested in much work is left to be done before some from every language group have heard the gospel.  I told him about the different language groups in the world that have no representatives in heaven, and also of the 100+ unreached people groups in the Finisterre Mountains (the haystack of a mountain range of which Mibu is a but a tiny needle).  What undeniable evidence of the Holy Spirit’s work in Royfo’s heart!  Upon hearing of the Gospel destitute tribes remaining still in Papua New Guinea, Royfo said, “When you missionaries are done with your work in Mibu, maybe you guys should go on to another country, where us New Guineans cannot go.  Let us New Guineans finish the work in New Guinea!”

Royfo’s heart and enthusiasm for the task at hand is an absolute joy.  Though I would never dampen his zeal, I believe reality is that it will take many, many more missionaries of any and all nationalities to completely reach the rest of Papua New Guinea.  Pray with us for more laborers for the harvest!  People like Royfo who have just met their Lord and Savior and cannot wait to share Him, as well as people who have known God for many years. 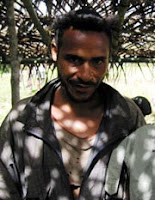