Coming home, I think that this has been one of those months that is challenging to sum up in an email! I think parts of my trip to Mibu will probably just continue to leak out here and there as I process and remember all that God has done in me, through me, and before my eyes. He is so worthy of praise!! Visiting in shorter spurts really opens my eyes to the growth that continues to take place in the Mibu and Mina churches. Thank you for praying for me, and for my family while I was away from them. Thank you also for praying for this remote area of the globe, where the gospel is still so new!

One of the highlights of my trip included hearing the updates from the leaders of the church plants that have come out of the Mibu church. The village of Tariknan, which has struggled with ups and downs since the beginning, is seeing true life change in areas of gambling, stealing, and immorality. My heart thrills at hearing what the Word of God is doing in hearts, and knowing that the other unreached villages to the east of them are seeing this, too! In fact, one of those villages in the next language group over is now asking for the gospel to come to their people as well.

In Dagave they struggle with baptism, hearing conflicting views from different groups. I really don’t know why my friend and church leader, Keteng, decided to be baptized while he was in Dagave. However, my heart rejoices that God used it to motivate many others in Dagave to follow his lead!

As expected, not every area is moving ahead smoothly. These churches continue to need prayer, teaching, and discipleship. These young churches are on the forefront of enemy territory, spiritually. They struggle with desires to return to old thinking, with remembering those who are outside their daily interactions, and keeping zeal at times for moving ahead. (Sound like us??) We thank God for them, and pray for their continued growth, and the spread of the gospel in their mountain range.

May God continue to build His church!! 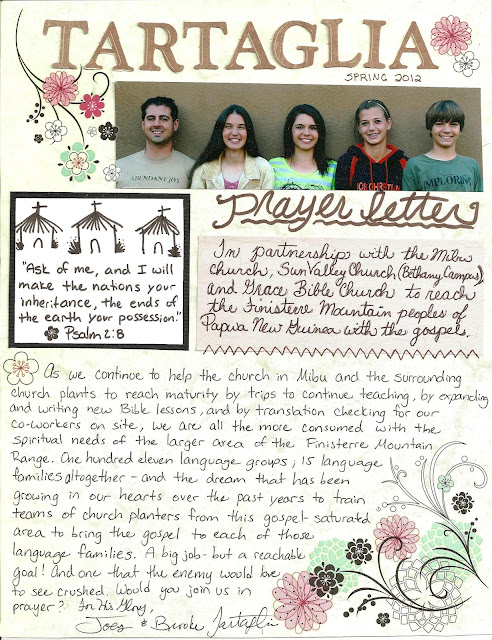 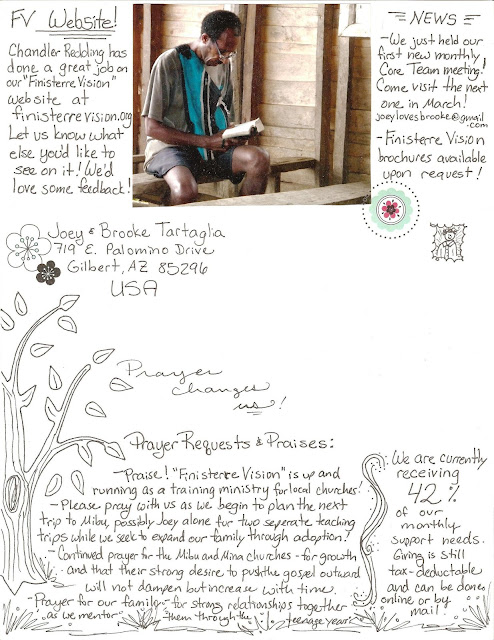 Dear brothers and sisters in God’s church in America,

We, the church in Mibu, send our greetings to you Christian believers. Through the work of Jesus Christ, God has caused us to become one family. It’s very true that there is a time in the future that we will meet each other face to face and be joyful. Right now we aren’t able to meet each other – we can only communicate via letter. Later God will cause us to meet and talk together.

We have come to understand this teaching that Jesus is the only road for us sinners to come to God, our Master. And so now we are joyful and thankful to God. He sent us missionaries to explain the Gospel to us so that we could be saved. It wasn’t as if we wrote a letter requesting missionaries to come. We were just going about our lives and God saved us.

And now we believe that God is going to do something similar in order to save the other people that He desires to take for Himself. Here there are many requests that come our way from the other languages in our area, wanting to hear the message. There are many different people sending messages requesting to hear the message. Young people, old people, disobedient people, even leaders of other religious groups. They are sending their requests, but we as limited people find it difficult to fulfill their request. Everything happens according to the plan of the Lord.

There are places that we’d like to bring the Gospel, but the task of Bible Translation is overwhelming. So we’re telling you about this concern in hopes that all of us can pray and strategize together and find a way to bring salvation to these groups.

That’s all! Thank you! And may God be with you all.

Hard to believe this time in Mibu has come to a close. Hard to leave our co-workers, and hard to leave when it feels like there is so much left to do. Yet we are so encouraged with the church body at large, and know it is not only we Americans who have the abilities to lead and the Holy Spirit to convict!

On the last two Sundays, we had the opportunity to watch two good friends get baptized in a fish pond, were able to finish teaching through 1st Corinthians, support the local leadership by addressing some issues the church is dealing with, and help prepare for the short term team visiting Husas this week. We enjoyed Skyler’s new pet with her (something like a bush o’possum), inventoried our food and toiletries for our next trip out, and said what felt like hundreds of good-byes. I’m not sure if it’s a standard leave-taking around here or not, but a few of my friends always leave me saying, “You know, I might die while you are gone…!” As if all the goodbyes aren’t hard enough already!!!

On our ride into town from the airstrip, Brooke talked with the driver about leaving the bush. Most town people still have roots in a bush village. He came to town as his children grew up to provide higher education for them – high school, teacher’s college, etc. Brooke told him we were leaving for some of the same reasons. It was insightful to hear his ideals – from a very educated, well dressed, articulate town man with a good job… he said, “What I love the most is to be back in the village, to get outside early in the morning and work for a few hours in my (food) garden on my land as the sun comes up. Then, I want to sit on my hill, overlooking the valley and the land, and have time to sit and talk with the other men, and live with my family there around me.” I love understanding better the full circle of many of the village person’s ideal thoughts of living in town and be able to just buy food at a store, and live in the hustle and bustle of town surrounded by so many other people. 🙂

Thank you for your prayers for a smooth and safe trip back to the desert from the tropics!

I went to visit Moofore again at his hut. Walking up the path to his place, I felt such a sense of the bigger purpose God has for us during our stay on earth. Isn’t it incredible that hundreds of people can be praying for the salvation of one man on the other side of the earth? What a privilege it is to be involved in what He is doing in the world.

Moofore called me in, and we sat talked for a while on local matters before the conversation moved to spiritual things. As we caught up, God brought to mind the many people who wrote to say they were praying. Thank you, each and every one of you who prayed! The only thing I felt lacking as we talked together was the lack of other Mibu believers there with me. So many others here have been involved in sharing God’s Word with him over the years. No sooner did I have that thought, than two Bible teachers from the Mina churches (8 hours away) and one of the teachers of the Mibu church poked their heads through the doorway!!! As they walked into the room my heart was bursting at how God was answering our prayers. I looked at the men God had sent at just the right moment (even the right day!). Each of these men has sacrificed for the sake of the Gospel. And now all this coming together for one crippled old man! God’s patient love truly is great!

The timing was right, and we were eager to talk about Christ. Moofore soaked it up, interspersing questions and thoughts of his own. We discussed Jesus being born sin-free, His being God, and also Emmanuel – “God with us”. We talked about how he was called “The Lamb of God who takes away the sins of the world.” We talked about how Jesus miraculously fed thousands of people and how so many of them sought Jesus not for a relationship with Him, but to get more food out of Him. Finally we talked about how Jesus was punished not for His own sins, but for ours. And how God’s anger for sin was given completely to the One who never sinned. In illustrating the wrath of God being absorbed by Jesus, one of the men pointed to a sheet hanging in the doorway that was casting a shadow into the house. He said that God’s wrath is like the sunrays, and that Jesus is like the sheet that absorbed the sun, casting a shadow for us to rest safely in.

Moofore spoke and answered with real understanding, so we asked him again where he thought he would go if he died. He said confidently that he would go to heaven. We asked him about his previous stumbling block – his own sin.
His reply: “Because of my own sin I deserve hell. But our penalty, I mean, MY penalty, has been paid by Jesus!”

Rejoicing along with the angels,
J&B
Mibu, PNG